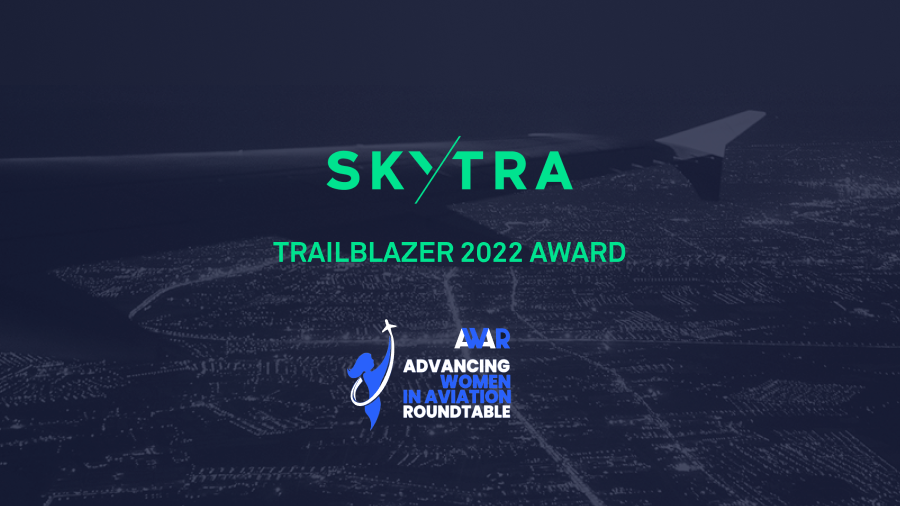 18 January 2022, London – Elise Weber, Co-Founder of Skytra, the wholly owned subsidiary of Airbus, has been announced as winner of the 2022 Trailblazer Award presented by Advancing Women in Aviation Roundtable.

Advancing Women in Aviation Roundtable (AWAR) is a non-profit corporation, registered in the US on a mission to engage with CEOs and other chief executives to build awareness and develop actionable strategies to promote the development and advancement of women leaders in the aviation industry.

The AWAR Trailblazer Award recognises men and women who have made extraordinary contributions to the advancement of women in aviation or who have personally broken the “glass ceilings” within their respective organisations.

Elise has excelled in global aviation over the past 15 years through her dedication and operational excellence. Her mission has been to make a positive change in the industry by working directly with the entire air travel value chain, understanding their challenges on a deeper level and working to produce innovative solutions.

Over the course of her career, Elise has continued to push boundaries and has gone from being often the only female in a department, to developing her own roles within businesses, to co-founding Skytra alongside her Airbus colleague Matthew Tringham.

The pair received approval from Airbus’ Executive Committee to establish an aviation risk management start-up. In January 2020, Skytra was officially launched at the World Economic Forum in Davos with the purpose of bringing new risk management solutions to the aviation industry.

Today, Skytra is the world’s only FCA regulated Benchmark Administrator measuring the price of air travel across the globe. These air travel reference prices can be used for hedging, insurance, contracting and floating lease rates – helping to re-distribute the ticket price volatility risk across the entire value chain.

Commenting on winning the award, Elise said: “I am honoured to receive this award. Being named a trailblazer by AWAR marks an incredible few years for me in creating Skytra and building a business that will help airlines across the globe particularly given the new economic reality we are in. This has not been an easy journey but we are making leaps towards a healthier industry and I hope to inspire other future trailblazers to be an advocate for change to help drive the incredible progress there has been in the industry so far and make sure this continues.

“At Skytra, we are striving for diversity in all forms. As a start-up we need to be creative and adapt to the changing environment which we believe we can only achieve with a diverse and fulfilled workforce. We make sure everyone feels included and valued at work and that the aviation industry is open to everybody – especially women since they are definitely underrepresented today.”

The Trailblazer Award was presented during AWAR’s virtual Thought Leadership Roundtable on January 18 2022.

By clicking “Accept All Cookies” you agree to the storing of necessary cookies to enhance navigation and to make our site work. We also set optional analytics cookies (including third party cookies) to help us improve the site and enhance your user experience by analysing your usage of the site.

When you visit any website, it may store or retrieve information on your browser, mostly in the form of cookies. This information might be about you, your preferences or your device and is mostly used to make the site work as you expect it to. The information does not usually directly identify you, but it can give you a more personalized web experience. Because we respect your right to privacy, you can choose not to allow some types of cookies. Click on the different category headings to find out more and change our default settings. However, blocking some types of cookies may impact your experience of the site and the services we are able to offer.